(REUTERS) – Scientists in Vienna are seeking to sequence the genome of an ancient flowering plant believed to have been buried by an Ice Age squirrel near the banks of the Kolyma River 32,000 years ago, a top site for people looking for mammoth bones.

A seed cache discovered by a Russian team years ago containing the Silene stenophylla, allowed scientists to extract tissue at depths of 20-40 metres below the surface from the frozen seeds and successfully germinate the plants later.

They fed the tissue cultures with a varied number of nutrients to induce root growth, and once the plants were rooted, they were transplanted into pots in a greenhouse, bringing the ancient plant back to live.

At Vienna’s University Of Natural Ressources And Life Sciences, plant biotechnologist and professor Margit Laimer is now seeking to sequence its genome and figure out the order of its DNA, which can lead to understanding what its genes do, how different genes are related, and how the various parts of the genome are coordinated, hoping to uncover the conditions that kept the seeds viable for 32,000 years

“We hope we can find changes in genes that allow plants to adapt to very dry or very cold or very hot conditions, and to use this knowledge, this new piece of knowledge that we can create for new plant improvement,” she told Reuters.

MANILA, Philippines — The Department of Foreign Affairs (DFA) through the Philippine Embassy in Vienna said it is closely monitoring the situation in the capital city of Austria.

This was after several gunmen opened fire near a synagogue and killed at least one on site and left several others injured.

The Austrian Ministry of Interior said the incident was a terrorist attack.

The DFA advised Filipinos in Vienna to stay indoors as encouraged by the Vienna Police as operations are still ongoing.

One of the suspects allegedly was killed in the gunfight with authorities but others remain at large, the Austrian government reported. 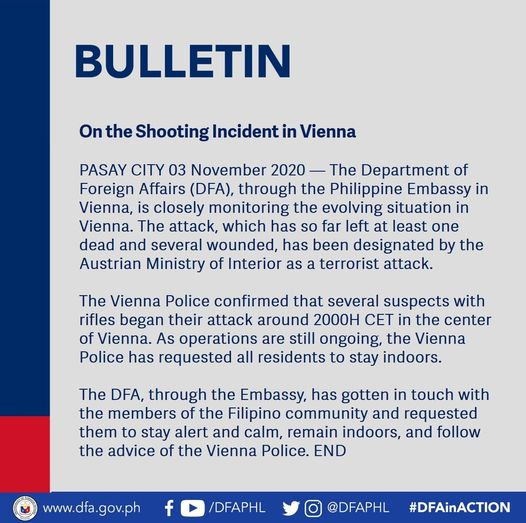 (Reuters) – The U.S. Department of Justice’s antitrust division on Monday announced its first prosecution specifically targeting Internet commerce, saying a man has agreed to plead guilty to conspiring to illegally fix the prices of posters he sold online.

David Topkins was accused of conspiring with other poster sellers to manipulate prices on Amazon.com Inc’s (AMZN.O) Amazon Marketplace, a website for third-party sellers, from Sept. 2013 to Jan. 2014, according to papers filed in San Francisco federal court.

The Justice Department said Topkins also agreed to pay a $20,000 criminal fine and cooperate with its probe. His plea agreement requires court approval.

Contact information for Topkins’ lawyer was not immediately available. No one answered a phone call to a David Topkins listed in San Francisco.

Topkins was accused of conspiring with other poster sellers to use algorithms, for which he wrote computer code, to coordinate price changes, and then share information about poster prices and sales.

The Justice Department said this activity violated the Sherman Act, a federal antitrust law, by causing posters to be sold at “collusive, non-competitive” prices.

“We will not tolerate anticompetitive conduct, whether it occurs in a smoke-filled room or over the Internet using complex pricing algorithms,” Assistant Attorney General Bill Baer of the Justice Department’s antitrust unit said in a statement. “American consumers have the right to a free and fair marketplace online, as well as in brick and mortar businesses.”

Amazon Marketplace competes with eBay Inc (EBAY.O) in letting merchants sell goods online. It is separate from Amazon’s business where the Seattle-based company sells books, electronics and other goods online.

Amazon was not charged in the case against Topkins. It did not immediately respond to a request for comment.