SHENZHEN, China, Jan. 19, 2021 /PRNewswire/ — The widely acclaimed animation app from Visual Blasters is now available on AppGallery. With over 30 million users and counting, FlipaClip is the leading animation app to help Huawei users bring their wildest creations to life. 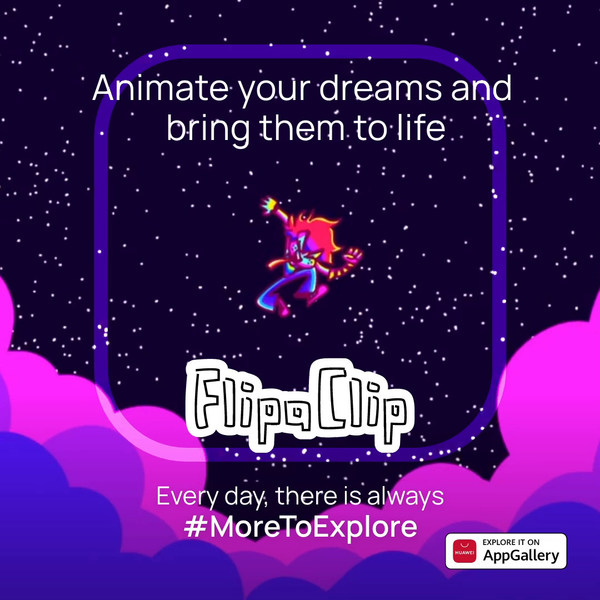 FlipaClip offers a wide range of powerful yet intuitive drawing and animation tools that can empower users to create quality animated videos with ease regardless of proficiency. From indispensable tools such as Brushes and Fill to advanced features such as onion-skinning and frame viewers, AppGallery users will find that FlipaClip is a feature-rich app that makes animation fun and easy to learn.

The developers at Visual Blasters are dedicated to help users bring their animations to next level. That’s why the app includes functionalities such as audio editing, layers animation, and timeline control. As a testament of their effort, FlipaClip boasts a thriving community of creators across various social platforms where users can join and get inspiration from. The Visual Blasters team also hosts frequent contests with attractive prizes to recognise their community’s creativity.

“We’re excited to partner with Huawei to bring one of the strongest animation and design apps to consumers on AppGallery,” said Jonathan Meson, CEO and Co-Founder at Visual Blasters. “The support from AppGallery during the development process has been tremendous. From integration to the QA process, we are impressed by the team’s commitment to helping us succeed on every level.”

In order to support FlipaClip in delivering the best animation experience for AppGallery users, Huawei’s tablet and cloud teams collaborated closely with the developers from Visual Blasters to optimise the app for Huawei’s flagship tablet, the HUAWEI MatePad Pro. The app not only works seamlessly on the tablet, but it also provides support for Huawei’s stylus, the HUAWEI M-Pen. The app is integrated with several Huawei Mobile Services (HMS) Core capabilities, such as analytics, in-app purchases, a/b testing, and remote configuration. With remote configurable changes, FlipaClip is able to push out server-side updates which allow Visual Blasters to continually enhance the app experience without requiring users to make an update to the app.

About App Gallery – One of the Top 3 App Marketplaces Globally

Launched in over 170 countries and regions, AppGallery is committed to meeting its 500 million active users’ diverse yet focused needs. The app marketplace actively seeks out partnerships with global and local developers to invite them to board the platform. AppGallery is an open and innovative app distribution platform accessible to all.

AppGallery recognises the importance and contributions of developers, and Huawei is dedicated to their success. AppGallery also provides full-spectrum operational support for developers worldwide and several developer-centric initiatives, empowering developers to innovate further in app development.

FlipaClip is now available for download from AppGallery at https://appgallery.huawei.com/#/app/C102999751.