TAIPEI, April 15, 2021 /PRNewswire/ — Major Taiwanese game developer USERJOY has launched the global version of its mobile game brand “Kingdom Heroes M”. The game is officially launched today (April 15th). During the celebration event period, when players create a character, they can obtain a “War Soul Prize”, which gives players a chance to incarnate into one of Three Kingdoms generals and gain great combat power. Also, the official has collaborated with PChomeSEA on the Youbeli e-commerce platform to launch cross-industry cooperation, preparing valued over 1 million NTD game virtual treasures and PChomeSEA coupons. It is hoped that all players can enjoy the global version of the mobile game “Kingdom Heroes M”. 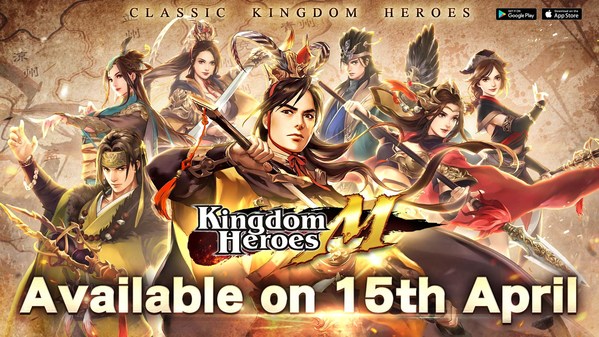 The legend of Kingdom Heroes is still vivid with the passion and inspiration of more than 10,000 players gathered online to fight in State War. This online game masterpiece returns with the appearance of “Kingdom Heroes M” that players can once again experience the thrill of a truly large-scale State War on their mobile phones! The international version is now available, allowing national and overseas players to fight in the State War without borders. Let’s call on the comrades of those years, to join “Kingdom Heroes M” and strive for honor once again.

Until May 20th, when placing an order at PChomeSEA store on Youbeli platform, players can obtain limited virtual treasures of “Kingdom Heroes M”; when participating in “Kingdom Heroes M” official Fanpage event, players will receive limited coupons for PChomeSEA on Youbeli platform. The combination of mobile games and different groups on e-commerce platforms promises to provide users more complete services.