MANILA, Philippines — The Department of Foreign Affairs (DFA) on Tuesday (January 13) reported a spike in cases of coronavirus disease (COVID-19) among overseas Filipinos.

In the agency’s latest advisory, 34 Filipinos abroad were added to the overall tally of positive cases, bringing the total to 13,056.

On the other hand, 27 overseas Filipinos have recovered from the disease.

Most of the new cases were reported in the Americas, Asia and the Pacific, and Europe.

To date, the Middle East and Africa remains to be the region with the most number of confirmed COVID-19 cases, recoveries, under treatment, and fatalities among our nationals.

The Americas has the least numbers in all categories compared to other geographic regions, except in the total number of deaths wherein Asia and the Pacific ranks lowest with a total of only 21.

The World Health Organization (WHO) has lamented that distribution of COVID-19 vaccine to the “world’s poorest countries” could face delays.

WHO Director General Tedros Adhanom Ghebreyesus said richer countries and several private companies are buying up all the available vaccines. This also causes a spike in prices of COVID-19 vaccines.

“I need to be blunt: the world is on the brink of a catastrophic moral failure—and the price of this failure will be paid with lives and livelihoods in the world’s poorest countries,” he said.

“The situation is compounded by the fact that most manufacturers have prioritized regulatory approval in rich countries where the profits are highest, rather than submitting full dossiers to WHO,” he noted.

WHO previously promised free COVID-19 vaccines to poor countries enlisted in the COVAX facility, which includes the Philippines.

The WHO Director General also expressed concerns that the pandemic may last longer if there is no coordination in the vaccine distribution across the globe.

“Not only does this ‘me-first’ approach leave the world’s poorest and most vulnerable people at risk, it’s also self-defeating. Ultimately, these actions will only prolong the pandemic, the restrictions needed to contain it, and human and economic suffering,” he said. AAC (with reports from Mirasol Abogadil)

Tuguegarao City reverts to ECQ after surge in COVID-19 cases

MANILA, Philippines — The city of Tuguegarao has been placed under enhanced community quarantine (ECQ) again starting January 20 until January 29.

The latest restriction came after 81 new active cases of coronavirus disease (COVID-19) infection were reported in only one day.

The new tally raised alarm among local government officials due to the continuous spike in COVID-19 cases in the city following the holiday season.

In an interview, Tuguegarao City Mayor Jefferson Soriano said the number of cases was manageable for the first few days of January. The number surged, however, starting January 16 thus the change in their decision.

The new cases were reported in Asia and the Pacific, Europe, and the Middle East and Africa.

To date, the Middle East and Africa remains to be the region with the most number of confirmed COVID-19 cases, recoveries, under treatment, and fatalities among our nationals.

The Americas has the least numbers in all categories compared to other geographic regions, except in the total number of deaths, whereas Asia and the Pacific ranks lowest with a total of only 21. 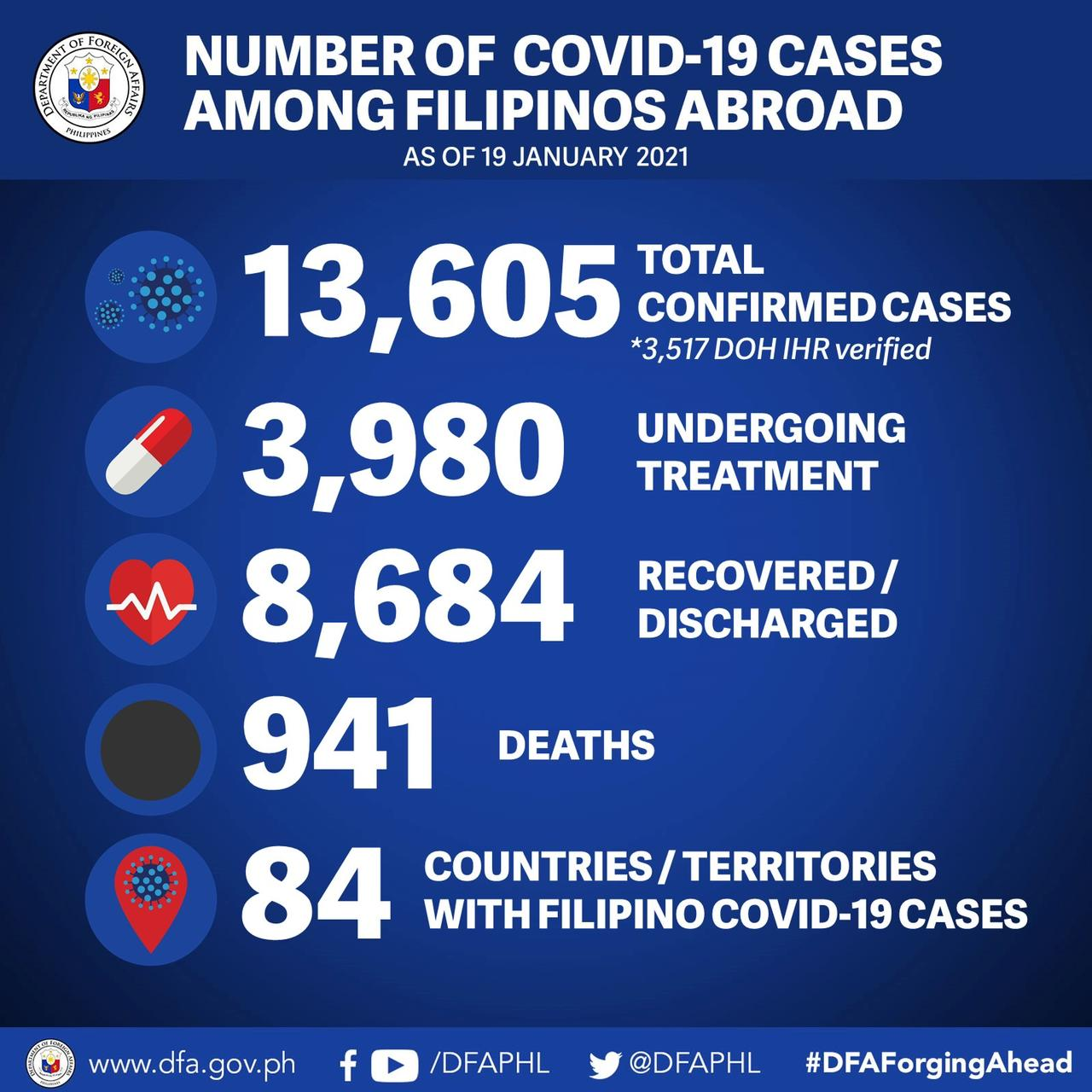