The result of the SWS survey further showed that 23% rate themselves as Not Poor, and 29% placed themselves on the borderline dividing the two categories, SWS classified them as Borderline Poor.

In May 2021, the SWS reported 49% of Filipino families rated themselves as poor 17% felt not poor, and 33% felt borderline poor.

In the Visayas, the Self-Rated Poor, Borderline Poor, and Not Poor are 70%, 24%, and 7% of families, respectively. MANILA, Philippines – Former Senator Ferdinand “Bongbong” Marcos Jr. emerged as the top choice for president in the 2022 elections, according to a survey released by the Social Weather Stations (SWS) on Monday.

In the poll conducted by the SWS last October 20 to 23, Marcos got 47% among respondents, followed by Vice President Leni Robredo with 18%.

The survey showed that 3% of the respondents were still undecided. 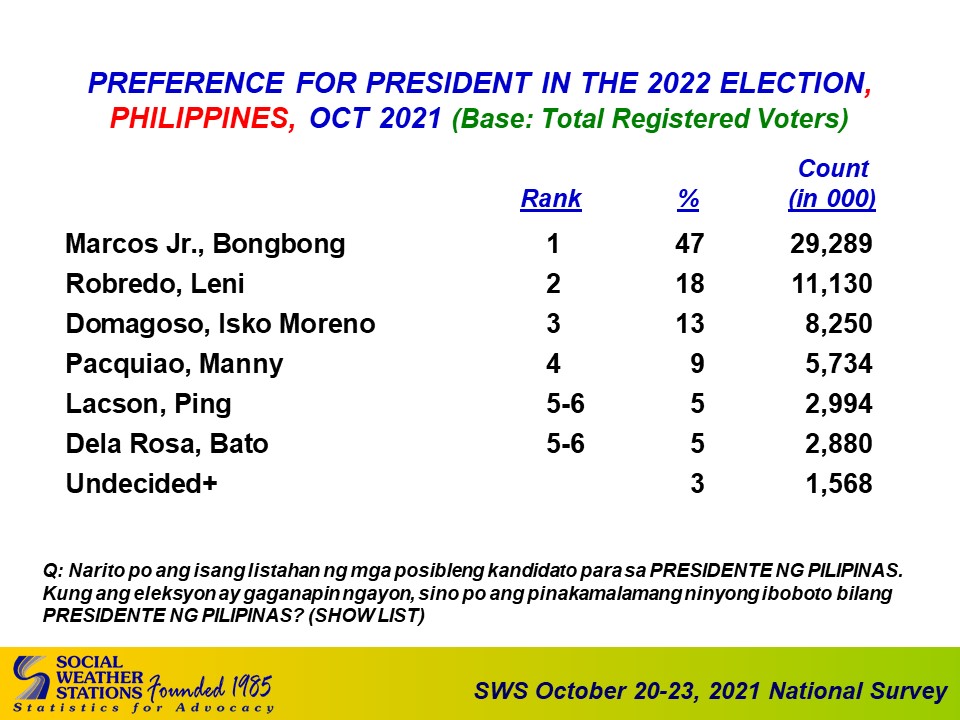 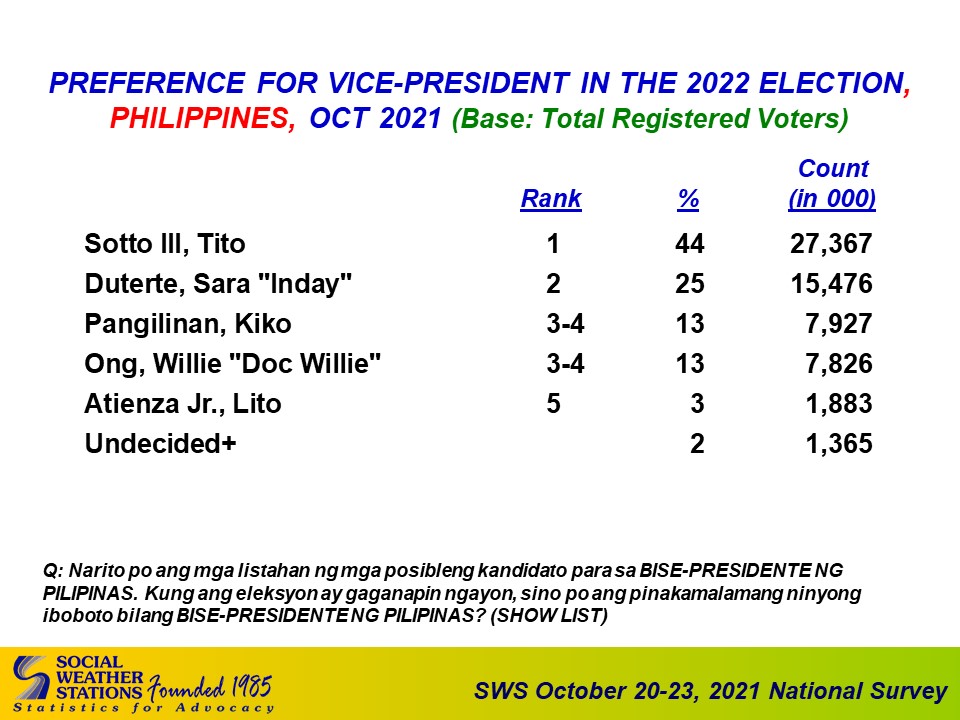 It was conducted a few weeks before Sara Duterte formally filed her candidacy as vice president, while Senator Christopher “Bong” Go declared his presidential bid only last November 13.

MANILA, Philippines – The number of Filipinos who are willing to get vaccinated against COVID-19 has increased, based on the latest survey released by the Social Weather Stations (SWS) on Friday.

Based on face-to-face interviews conducted from September 27 to 30 among 1,500 adults nationwide, 64 percent of adult Filipinos said they are willing to get inoculated.

The SWS said this figure is nine points higher than the 55% recorded in June. 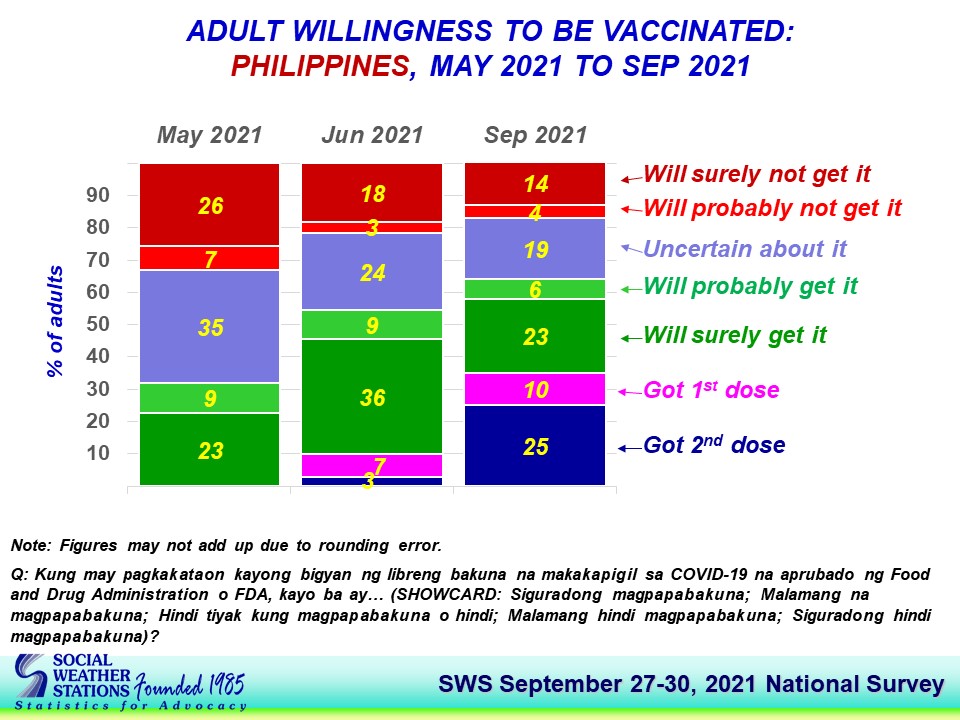 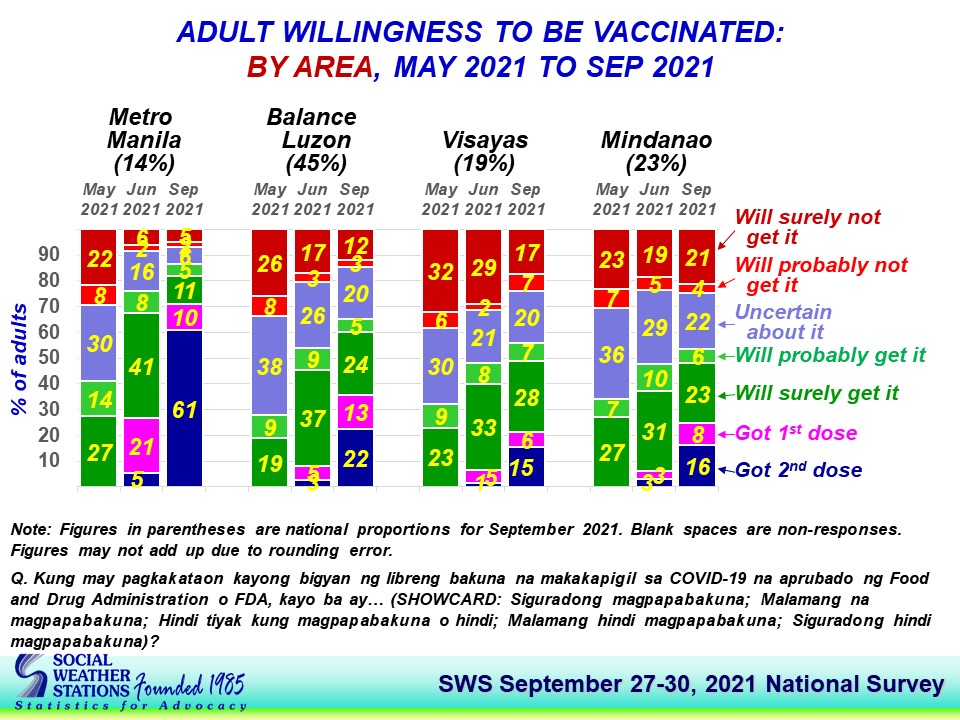 The Philippines has so far fully vaccinated 28.7 million individuals against COVID-19.

The national government has been eyeing to vaccinate more than 70% of the country’s population to achieve herd immunity against COVID-19.